First, take a look at a snapshot of the data and graph for Sunday, the first day of #moocmooc.

Then the Monday data. 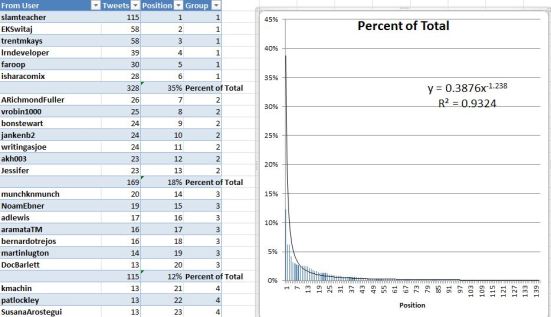 You can also see the two days together.

The first thing to notice is that both days display a very clear power law. This is not surprising, as power laws are expected in group phenomena. The power laws for the two days is nearly identical, and it will be interesting to see if that continues as the course goes on. We had only 90% of the participation in Monday compared to Sunday, and just 76% of the tweets. This bears out a tweet by isharacomix

It’s also interesting how the “board leaders” changed. You can see there was lots of mobility, people who didn’t tweet much on Sunday moving up the board. See the snapshot below. The users in pink moved up, those in green moved down, and those in white stayed put, and those at the end in blue & white didn’t participate on Monday. (I shrunk this up, if you want to see the spreadsheet, just leave a comment or tweet to @faroop).I’m a good example of the mobility, being at rank 45/156 on Sunday and 5/141 on Monday. For me, this reflects in part my participation on a weekend day when my primary obligation is to family, versus my participation during a work day. My participation is down today because I spent much of the day traveling from Boston to San Diego!

A big conversation has been going on amongst a bunch of people twitter about how to include more people in a MOOC. Can we change the power law at all so that it doesn’t drop off as fast? I’m going to try to storify it once I’ve caught my breath, but I feel like the data isn’t going to point us to a solution because we don’t know who everyone really is. What characteristics do the board leaders have in common? What about those with one or two tweets? If we want to know how to reach people we have to know something about them. So there has to be another way. I am particularly interested in the inclusion of those who may not feel like they have a place at the table, people who are disenfranchised for whatever reason. But, again, this data isn’t going to tell me who is missing. We can’t see who is not at the table if we don’t even have data on who is at the table.

14 thoughts on “Looking at the Data: First Two Days of #moocmooc”